20 of the Best Movies for Seniors to Watch During Retirement 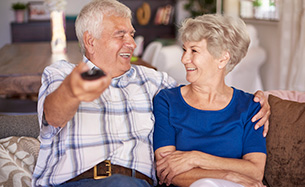 Everyone loves movies! So if you are planning entertainment for seniors, remember to stock up on some romance, whodunits and classic dramas they can relax and enjoy. However, with so many films catering to the younger generation, it might take a great deal of looking to find flicks that appeal to them. To help you out, the experienced care-giving team at The Holiday has put together a list of some of the best movies to watch during retirement.

20 movies your seniors will love:

At The Holiday retirement community, we provide a full range of fun-filled entertainment for seniors. We even created a Mini Movie Theater in one of our Recreation Rooms for our residents to watch HD movies projected onto a 92″ Screen, paired with a fantastic surround sound system to give our residents a true viewing experience. Our Services and Activities are designed to help our residents enjoy an active and stress-free retired life. Well-appointed accommodation, person-centered care and an experienced team make our seniors feel like they are on a permanent holiday. Come see what living with us is like.

Give us a call at 860-233-8208 to learn more about the services and amenities we provide at our retirement residences in Rhode Island and West Hartford, Connecticut. Fill out our online form to book a tour.